The water levels and the flow velocities can be influenced by the wind. The extent to which this happens depends on the wind force that exerts on the water surface. Historical, actual and forecasts wind data are available from the meteorological institutes. Wind speed and wind force can vary in space and in time. It is possible to take both the spatial and temporal variations into account in 3Di. In addition, it is possible to take local shield factor into account, caused by buildings or trees.

The standard wind data gives the speed and direction of the wind at a height of 10 m. In order to determine what force the wind actually exerts on the water surface, this information must be adapted to local conditions on the water surface. In the first approach, the vertical wind profile can be described with a logarithmic profile:

The drag-coefficient translates the wind speed on a 10 m elevation to the speed on the ground. The value is 0.005 by default, but can be defined by the user. At present this factor is global factor for the entire model, but in the future this factor could be defined as a spatial field on basis of land use maps and digital elevation models (DEM). 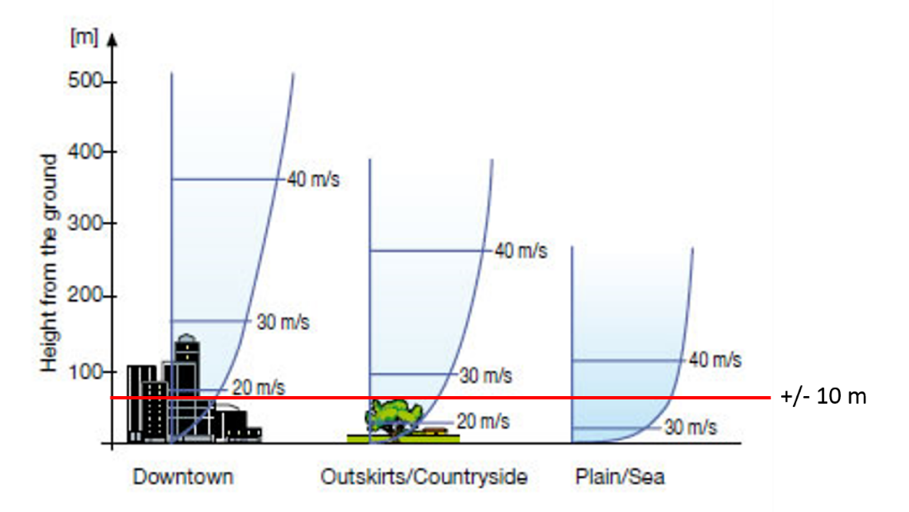 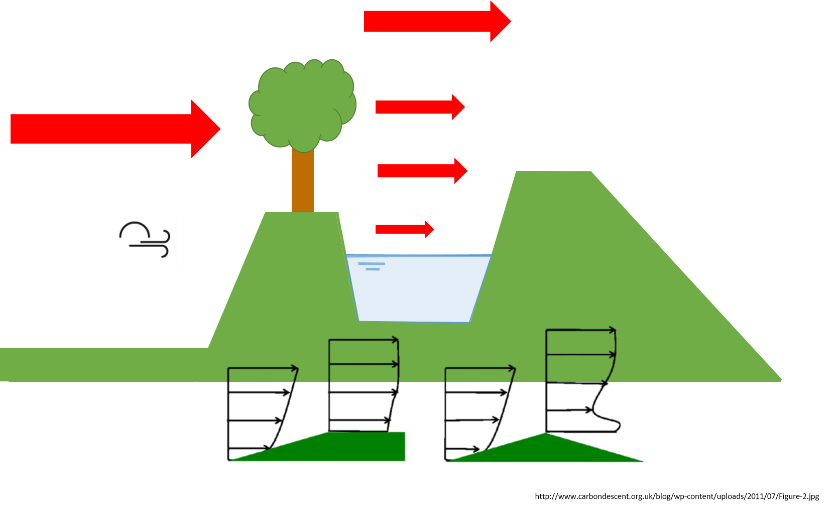 Local circumstances can have a high impact on the wind force¶

The wind shield factor is defined in 8 directions¶

The impact of wind on water levels and flow velocities can be made clear by looking at the balance of forces on a liquid particle. It is important to note that gravity is a force that works on the entire volume, whereas the friction and the wind forces work on a surface. This implies that the wind has more impact on a thin layer of water than a deep layer of water.

The shear stresses are dependent on the local velocity of water and wind. The wind shear stress is described by:

In which:
ρa= density of the air,
Cw= drag-coefficient of the wind,
L = Local wind shield factor,
|uwind| = wind speed and
uwind//= wind speed in the channel direction.

In summary, the wind forcing is formulated by:

The wind forcing is determined over the total area of the calculation domain (Ω). In addition, we look at the relative speed of the wind in relation to the speed of the water. On thin water layers, such as in case of a flood, the wind has a lot of influence on the velocity of the water. However, the speed of the water is limited by its critical velocity. Other processes such as waves and foaming will then dominate and remove energy from the system (as it is no longer converted into speed). These waves are not included in the 3Di model. The factor χ overcomes this limitation. This factor is important for the stability of the model, especially when the wind works on very shallow water layers.

In the 2D domain the impact of wind is formulated by: