One of the source terms described in Conservation of mass is rain. Naturally, rain can fall on the 2D domain. However, 3Di also supports inflow from rain in the 1D domain. The rain is determined by the 0D Inflow module and adds the outgoing flow directly in the 1D network.

There are several options for the user concerning rain. Rain is always set as an intensity in mm/hr. During a 3Di simulation, rain is automatically converted into rainfall, as it is scaled with the active cell surface area. The active area of a cell is defined by the cell size and the bathymetry. In case the bathymetry is not defined (the bathymetry raster can contain nodata values) in parts of a cell, these parts do not contribute to the active area. 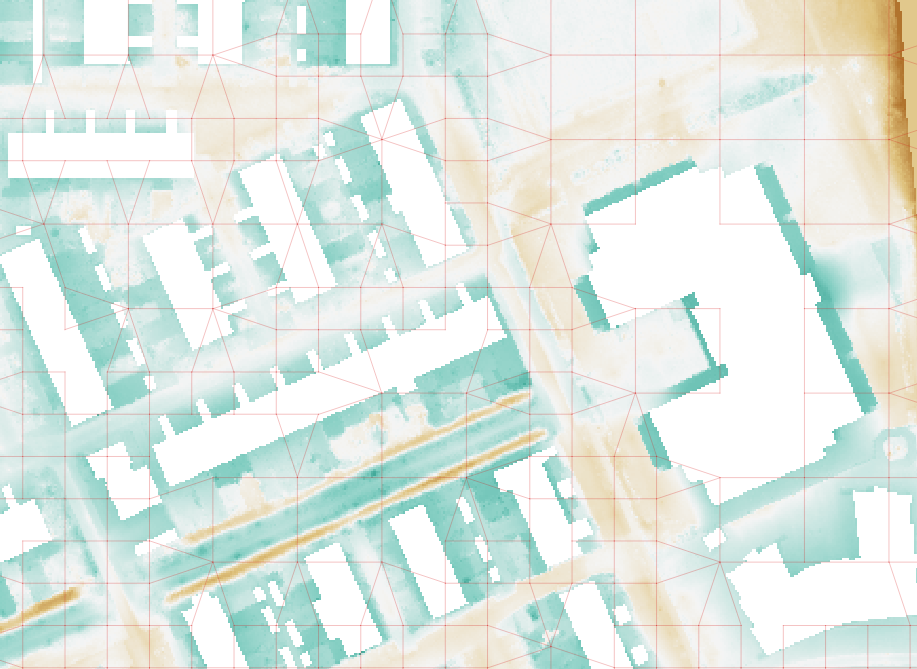 It can only rain in areas where the bathymetry is defined. The areas with nodata values in the Bathymetry file are white.¶

The options for rain:

Via the 3Di API are only options 1, 2, and 3 available. Via the API, multiple periods of constant rain can be added, to customize your own rain event.

Rainfall is translated to a lateral discharge on a 1D node.¶

The so-called surfaces that represent the areas capturing the rain always contain a geometry. This allows to use the 0D module in combination with spatially varying rain.

3Di allows the user to select whether rainfall falls on 0D, 2D or both. Using both 0D and 2D rainfall can be useful in several cases, for example:

When using both 0D and 2D rainfall one must be aware that the user is responsible for defining the correct areas in 0D and in 2D. This in order to avoid an overestimation of the area capturing rain. This can be ensured by cutting areas from the DEM or by including interception (Interception). Rainfall over 2D and through 0D surface as a lateral discharge.¶

For spatially varying rainfall in combination with the 0D inflow module, the intensity is determined based on the location of the centroid of the inflow surface.