Surface water is not only affected by rain and in and outflow of water originating from other regions. In reality, surface water is fully coupled to and interacts with groundwater. This implies that the behaviour and the quantity of water at the surface is affected by groundwater too. The flow in the subsurface is influenced strongly by processes on both very large and small scales in time and space. In order to take all processes into account, models with significant computational times are required, even when surface flow, sewer systems and other processes are neglected.

3Di aims at a modelling method that can handle short term effects of heavy precipitation and inundation, including the interaction with groundwater. For the computation of surface flow detailed information about the topography and the land use is often available. However, the information about the soil is often much less accurate and detailed. This lack of data and the complexity of the processes involved, favor a scenario-approach when dealing with groundwater flow. Especially, when investigating the sensitivity of areas to flooding and hindrance originating from groundwater. This approach requires a fast numerical model that can integrate the effects of the sewer system, surface water and overland flow. Therefore, processes need to be simplified. First, a short summary of the concepts implemented in 3Di is presented. In the sections that follow, some more detail and context is given about large scale groundwater flow, the implementation and the choices made in the model.

2.3.2. Summary of groundwater concepts in 3Di¶

The Figure above shows a cross-section of a region with surface and sub-surface water. The Letters in the Figure refer to the following description of the main assumptions made for the computation of groundwater flow:

In the section below, while using the Letters and Numbers in Figure 1 and 3 the key concepts and the assumptions made for the groundwater computations are explained in more detail.

The subsurface is a general term for the whole domain below the surface, where many processes of the hydrological cycle take place. 3Di aims at a fast, but accurate computation of the flow, especially concerning the interaction between groundwater and surface water. Therefore, the domain of computation focuses on the top aquifer. However, before zooming in at this layer, a schematic overview of some of the large scale processes is given in Figure 1. The various processes that are discussed here are indicated by Romain numbers. Number I indicates surface flow and overland flow. From the surface (Number II ) water can infiltrate or exfiltrate to and from the subsurface, where it can flow further in the horizontal or the vertical direction (Number III ). From thereon, several aquifers can overlap and interact. As they are separated by (semi-)impervious layers, they can exist under different pressure regimes. The exchange can, therefore, occur in both up- and downward direction (Numbers IV and V ). One aquifer can consist of a zone of saturation and the zone of acration (unsaturated zone). In addition, within one aquifer, the soil characteristics vary over time and space (Number VI ). To limit the modelling domain and the number of processes to be taken into account, the current method for modelling groundwater flow in 3Di, is focused on the processes in the top aquifer of the sub-surface layer (the red box of Number VII ). 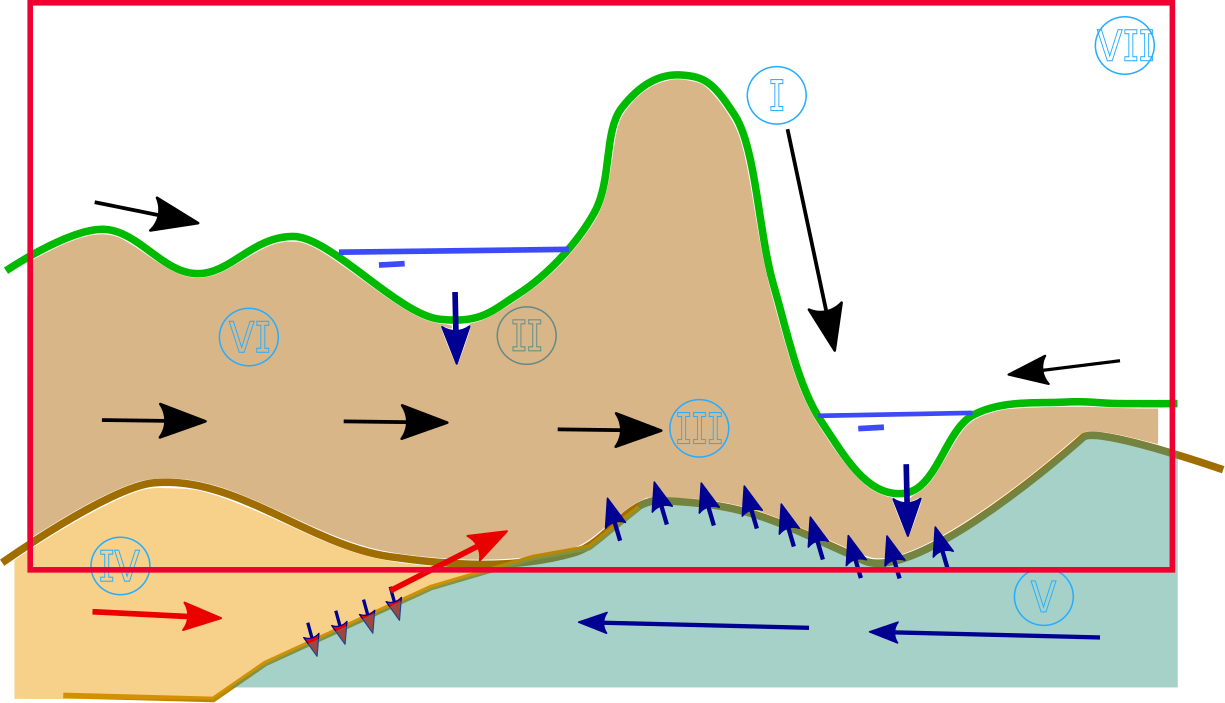 Most of the groundwater concepts on which the groundwater method in 3Di is based, are thoroughly described in the book of Jacob Bear and Arnold Verruijt, Modeling Groundwater Flow and Pollution. However, here a short overview is given of the key concepts and assumptions made for the groundwater method used in 3Di. These concepts are illustrated in the Figures 1 and 3 and indicated with Letters and Numbers. The general aim is to simplify the processes involved in the top aquifer, but to preserve enough accuracy for reliable simulations of the surface-subsurface interaction. The numbers below refer to those in Figure 3 and the letters refer to those in Figure 1.

is the infiltration rate varying in time and space,

are the equilibrium and the initial infiltration rates, respectively. The decay period

determines the time that the infiltration rate reaches its equilibrium. An example of the decay function is shown in Figure 4. 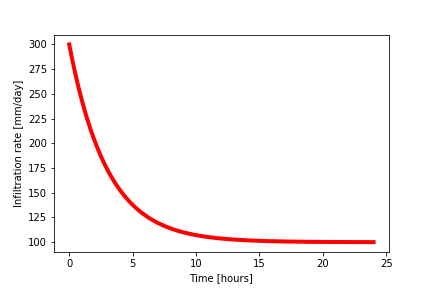 Infiltration rate according to Horton; with

The infiltration rate will start its decay as soon as the cell becomes wet. Currently, there is no process to restore the infiltration rate to its initial value. This would happen in real life when an area becomes dry again due to run-off or evaporation.

For the use of Horton infiltration, one chooses indirectly to take a groundwater level into account. This to ensure a limit to the infiltration; when the groundwater level reaches the surface. To take the storage capacity of the soil into account, one needs to define the impervious surface layer and the phreatic storage capacity, as well. The three Horton parameters (in [mm/day]), the impervious surface layer ([m] relative to a reference level) and the phreatic storage capacity ([-] between 0-1) can be defined globally and spatially varying. In case one uses the spatially varying option, a user needs to define a method for analyzing the rasters (taking the minimum, maximum or the average in a computational domain).

The initial conditions for the groundwater level can be added to the v2_global_settings table using a global value or a raster for spatially varying values.

You can download the complete overview of tables that 3Di uses in the spatialite database here.

Similar to the other variables, the results are saved in the result files, snap-shots and aggregated results. In contrast to infiltration computed according to Simple Infiltration, the Horton-based infiltration is computed on a flow line. Both a discharge (

The flow in the subsurface is computed under the assumption of hydrostatic pressure. This is also known as the Dupuit assumption. This implies that the flow in the saturated zone is fully horizontal and described by the Darcy equations:

the x- and y- component of the discharges,

). Even though, the Dupuit assumption can be invalid locally, it is very applicable on the larger scale. A famous analytical case, based on these assumptions is the Hooghoudt equation. It describes the groundwater level in between two open water channels, see Figure (5). 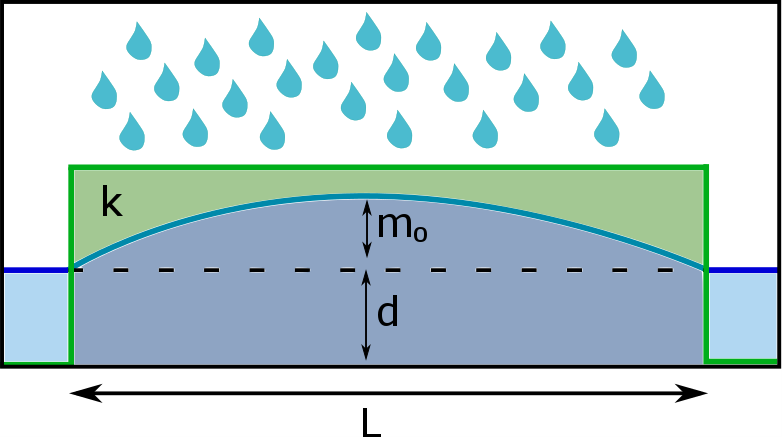 Hooghoudt: Typical example of groundwater flow according to the Dupuit assumption. (5)¶

The input for using groundwater flow is very similar to the input for Horton based infiltration. In addition to these parameters, one can define the Darcy or hydraulic connectivity values globally or using a raster for spatially varying values. The dimension of the hydraulic connectivity is in [m/day]. You can download the complete overview of settings that 3Di uses in the spatialite database here.

The numerical implementation of the horizontal and vertical flow is based on the concept of staggered grids as explained in The grid. This implies that pressure points are defined in the cell centers and flow is defined at the cell edges. The spatial resolution of the 2D surface flow equals that of the groundwater flow. Therefore, the connections between the surface and the subsurface are completely vertical and orthogonal to the surface and subsurface layers.

The timescales of groundwater flow compared to those of surface water flow, are generally considerably longer. This would favor an explicit formulation. However, the moment that the groundwater level reaches the surface, the timescales are the same. Therefore, only the horizontal flow is computed explicitly, but the vertical interaction is computed implicitly.

For the sources and sinks, we choose an implementation where the sources are computed explicitly, but the sinks are implicitly taken into account. This is to guarantee mass conservation.

We are working on a full description of the numerical implementation to be published in International Journal For Numerical Methods in Fluids.

The numerical implementation is developed by and under the supervision of G.S. Stelling, Stelling hydraulics, 2018