To allow flow to be computed numerically, space and time need to be discretised. For time are time-steps defined, and for space is a grid defined. In the sections below we elaborate on the grid specified for computations in the 1D and in the 2D surface water and groundwater domains.

In 3Di we make use of a so-called structured, staggered grid. This implies for the surface water and the groundwater domain that computational cells are perfect squares, where the pressure/ water levels and volumes are defined in the cell centres and velocities and discharges are defined at the cell edges. This also yields for the vertical coupling. In the Figures below, an example is shown of a grid in a 2D domain and the two-layer coupling. 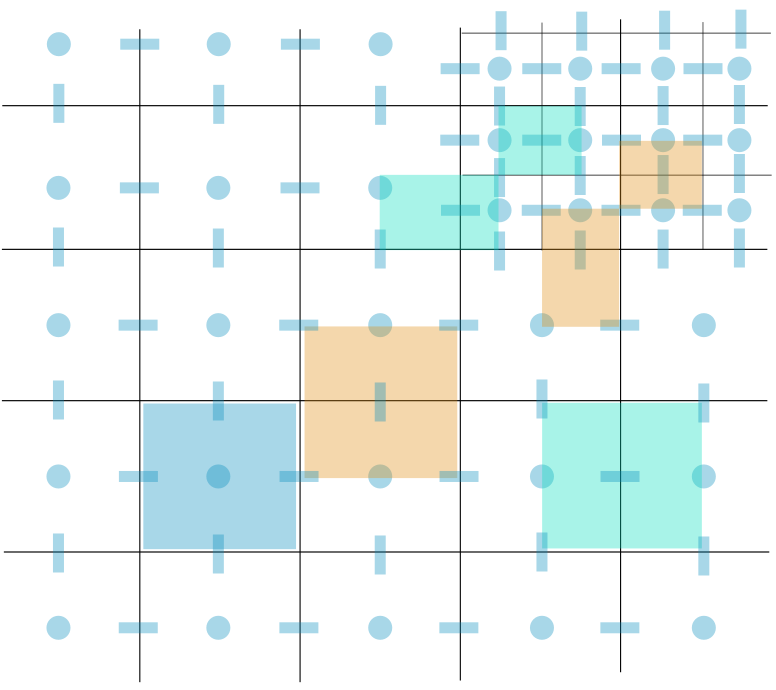 Example of a staggered 2D grid including a refinement; water levels/ pressures are defined in the cell centres (blue dots) and velocities at the cell edges (blue bars). Water level domains are indicated by blue areas, and the momentum domains by green and orange areas.¶ 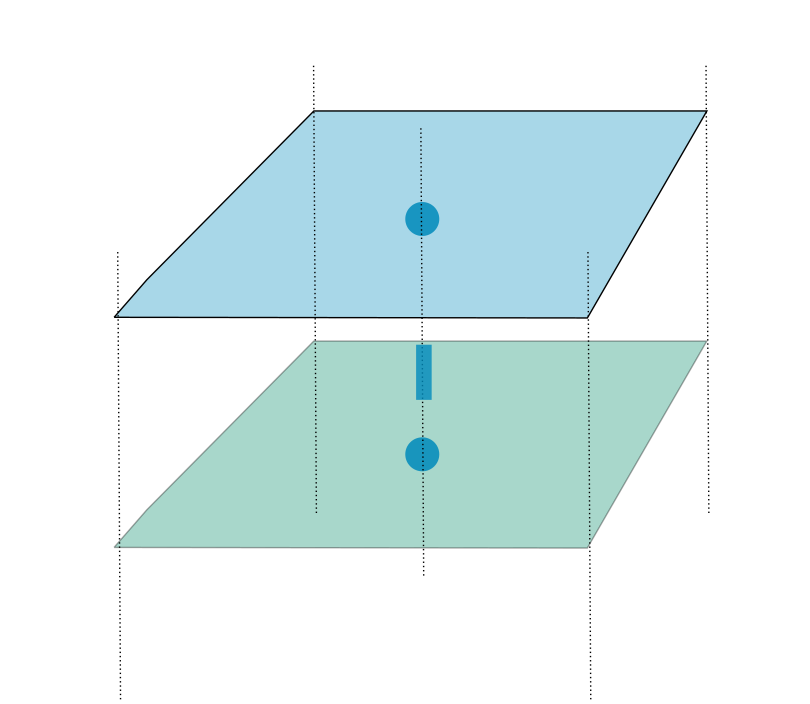 Example of a vertical staggered grid¶

The hydrodynamic computations are based on the conservation of volume and momentum. In the next sections (Conservation of mass, 1D Flow, 2D Surface Flow, and 2D Groundwater flow), the methods concerned for the computations are discussed. However, in order to solve the equations, the domains in which they are valid, need to be defined. In the Figure above, the volume and momentum domains are shown.

The computational cost of a simulation is strongly related to the number of computational cells. One always needs to find a balance between grid resolution and computational time. There are often regions where the flow is more complex or where one requires results with a finer resolution. To optimize the computational cost and grid resolution, users can refine the grid locally. 3Di uses a method called quad-tree refinement. This means, that in space, refinements are placed by dividing neighboring cells by a factor 4 (Figures below and above). This is a simple refinement method that forces smooth grid variations, which enhances an accurate solution of the equation. 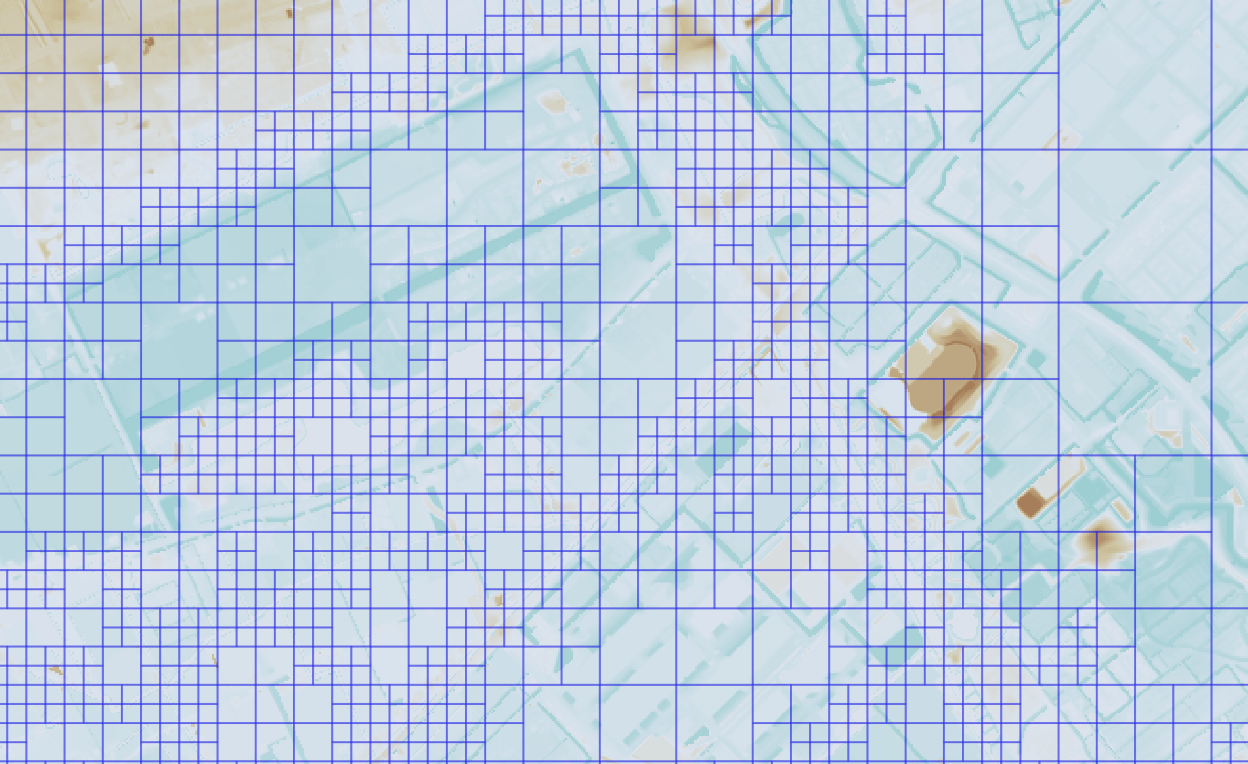 In case groundwater is taken into account, the grid refinement is present in both the surface layer and the groundwater layer.

Flow is strongly affected by the bathymetry. Therefore, to simulate flow accurately, information of the bathymetry is crucial. To illustrate the importance of a well described bathymetry, consider the three flows in a flume shown shown in the Figure below. While the bathymetry differs only slightly, the flow behaves completely different.

Examples of flow in a flume, where a slight change in bathymetry, strongly affects the flow.¶ 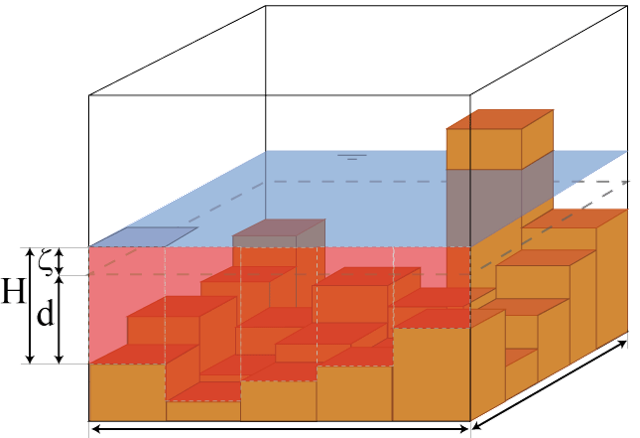 An example of a computational cell with a bathymetry defined on the subgrid.¶

Users define for the grid generation a cell size (of the finest grid resolution) and the number of refinement layers. A computational cell consists always of an even number of subgrid cells. In addition, the user needs to define where and if refinements should be defined. One can define polygons or lines to indicate these areas and the refinement level. For a detailed example, see Flood model.

The numerical grid is generated based on some the following settings: - Grid space - Number of refinement levels - Grid refinements

. In case the dimensions of a subgrid cell are 1.0 x 1.0 m2, the grid space can not be 5.0 x 5.0 m2. The grid space is defined in the v2_global_settings table and is the dimension of the smallest grid size. The kmax setting is the number of refinement levels. Locations where the refinements need to be defined can be added by a line using the v2_grid_refinement table, or by an area using v2_grid_refinement_area. In case two refinement levels are defined at the same location, 3Di will refine to the highest level indicated. 3Di will always aim at a minimum number of grid cells, it will coarsen the grid as fast as possible, but it will only be possible to do that in steps of four.

For studying the flow of narrow features in the landscape or sewer systems, it is advantageous to use one dimensional models. This allows for an extensive description of the system, without actually computing cross-flow phenomena. These are in those cases limited and the use of a 1D representation will reduce the computational cost. In 3Di 1D networks can be defined, representing open channels, manholes, weirs, orifices, culverts and closed pipes. There are several options to couple the 1D and the 2D domain (see Section 1D Flow). All options for the coupling allow for a fully integrated computation, this means that the full 1D and 2D systems are solved as one.

To compute the flow in a 1D network a grid is to be defined as well. Consistent with the grid defined for the 2D domain, a staggered grid is used again. Pressure/ water level points are allocated with a velocity point. An example can be seen in the Figure below.

An example of the grid of a 1D Network. Water levels/ pressures are defined in the cell centres (blue dots) and velocities at the cell edges (blue bars). Water level domains are indicated by blue areas, and the momentum domains by green and orange areas.¶

1D networks can consist of open channels, closed pipes and various structures. More about the various options can be found in the Sections 1D flow over structures and Channels. The resolution of the 1D domain can be defined per 1D element.